The dance company arrived in Japan one week prior to their performance and jumped straight into local exchanges and rehearsals in the lead-up to their finale performances. 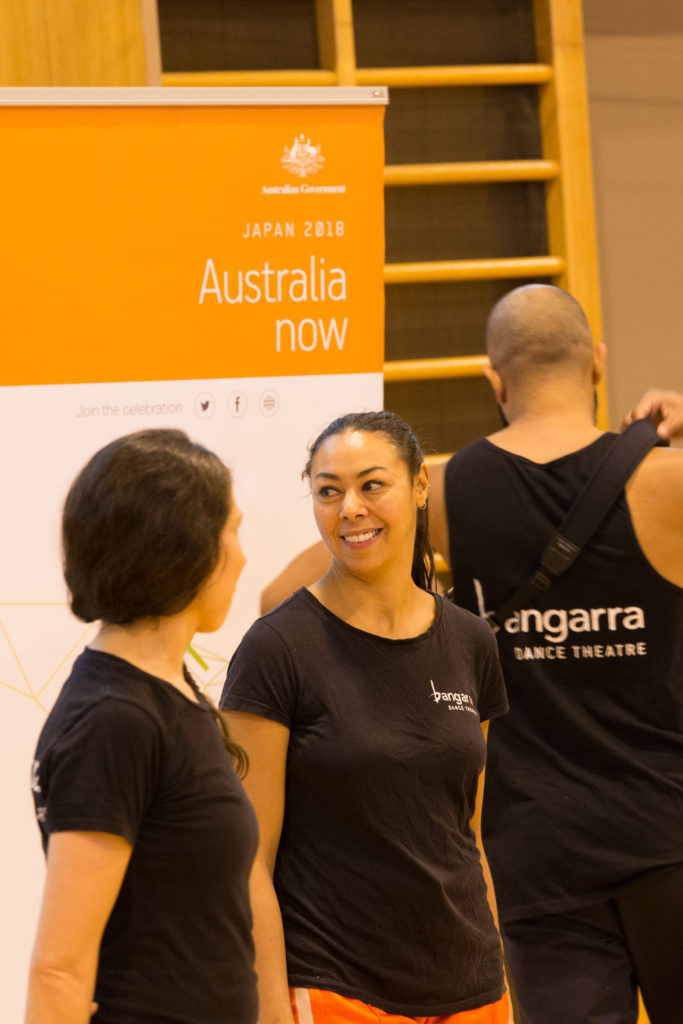 At Ochanomizu High School, a total of 20 students from the school’s dance club took part in the workshop. The program started in a relaxed atmosphere after Mrs Jo Court OAM, spouse of the Australian Ambassador, introduced herself with greetings in Japanese, following self-introductions by the visiting Bangarra members.

After some stretching exercises, Bangarra dancers showed some of the dance movements inspired by Australia’s Indigenous cultures, such as fishing manoeuvres that originate in Torres Strait Islander communities, and choreography that imitates women’s traditional customs, such as washing their hair with sea water. The students were very quick to follow the dance moves and enjoyed gaining new experiences. 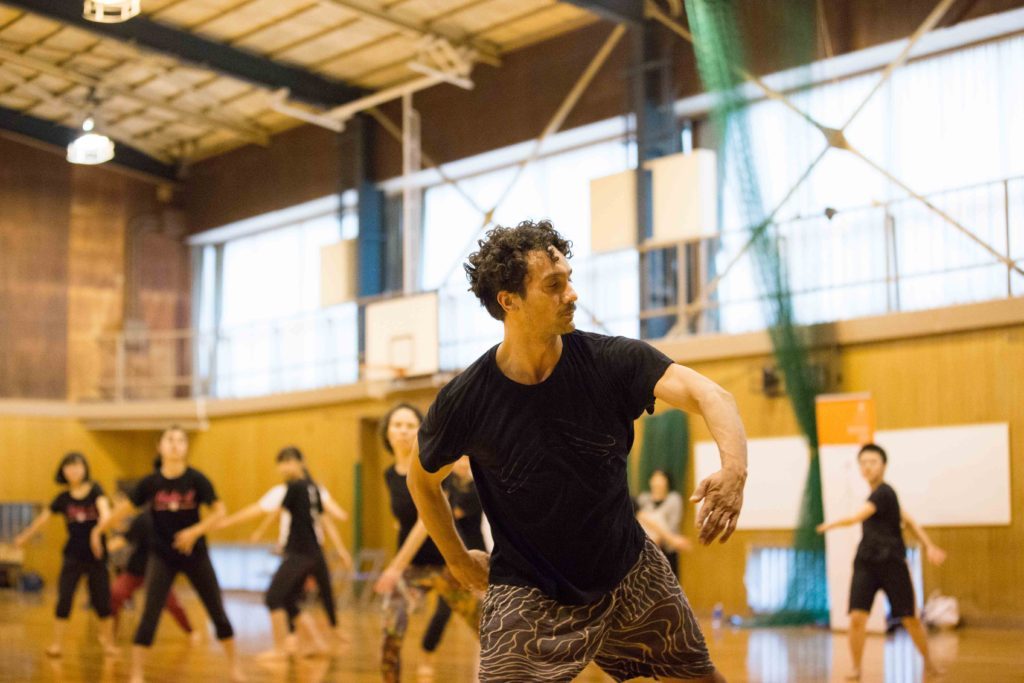 “It’s become a real wonderful opportunity for the students as they are usually practicing on their own without professional coaches,” Ms Arisa Yoshiuchi, teacher of Ochanomizu University Senior High School and advisor of the dance club, told Embassy staff during the workshop. The event concluded with an active Q&A session, indicating the students’ great interest in Bangarra’s unique art. 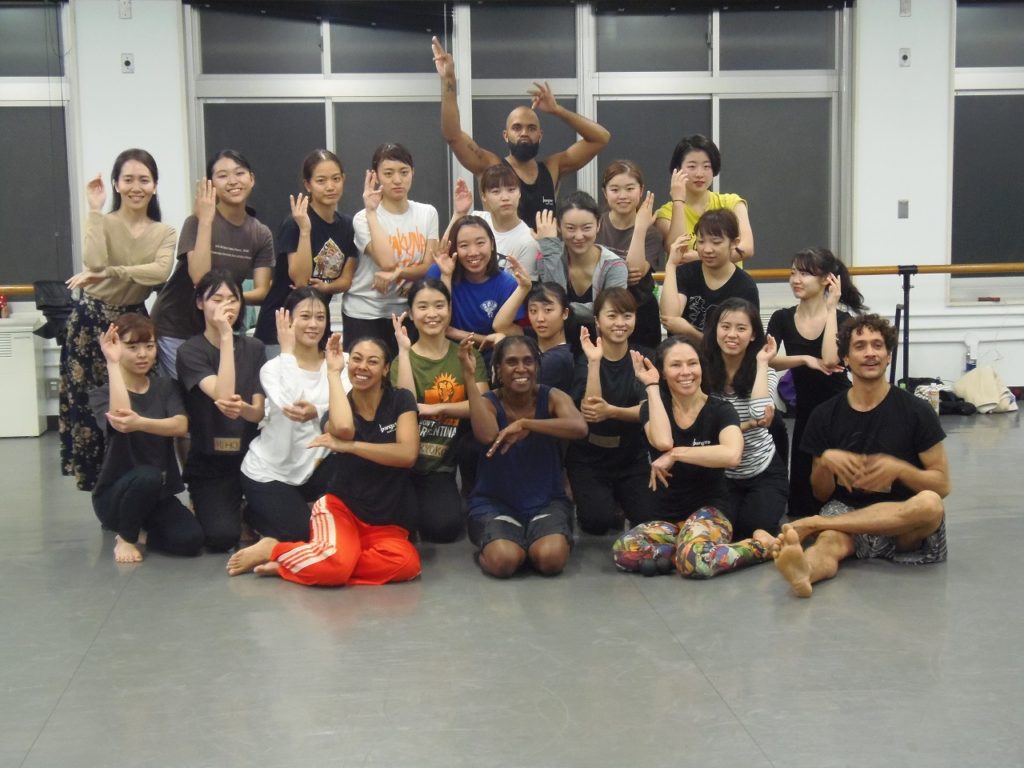 The company members stayed on at the University to hold a masterclass with students of Ochanomizu University. The semi-professional group instantly absorbed the essence of the dance moves performed by Bangarra members. The company members imparted to students one section of the actual choreography to “Spirit 2018,” one of the performances that Bangarra proudly brought to Japan as a finale of the Australia now 2018 program.

Details on student feedback can be accessed from this page (Japanese only). 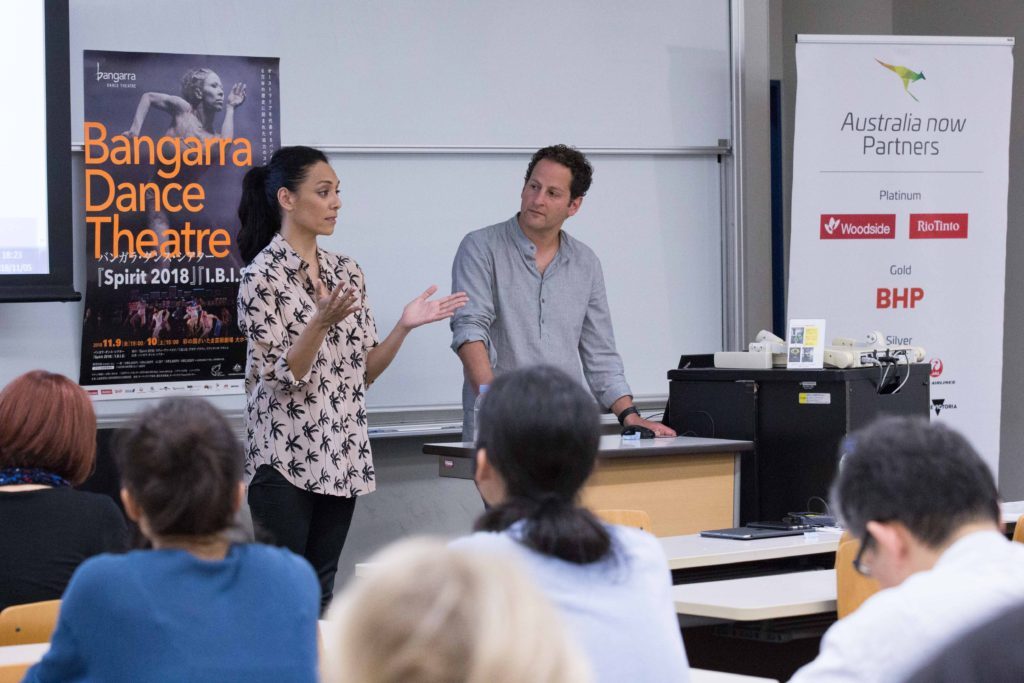 The two professionals spoke in front of some 40 attendants at the prestigious university, including university students and general public, further spreading the messages that Bangarra is committed to conveying through their performances. Mr Magid spoke about the large responsibility he carries as Bangarra’s Executive Director, explaining complex and delicate processes of learning from and giving back to Indigenous communities through contemporary dance.

Ms Brown said she was able to reconnect and rediscover her own family connections to the Torres Strait Islands through her dancing and choreography with Bangarra. She said she hopes to tell stories around the world of resilience and strength in Indigenous communities, which had often been oppressed in the past and excluded from mainstream arts and society.

Mr Magid also gave a one-on-one interview the following day with Saitama Shimbun newspaper, where he emphasised the significance of the visit to Japan by Bangarra. He said that the company was proud and excited to showcase Australian Indigenous cultures through contemporary dance.

On 9 November, the first day of Bangarra’s performance, there was an outstanding turnout at the large hall of the Sainokuni Saitama Arts Theater in Saitama-city, Saitama. The theatre was filled with excitement shared by all audience members –  keen to witness world-class contemporary dance strongly rooted in Aboriginal and Torres Strait Islander cultures and traditions. The audience was overwhelmed by the powerful dancing and unique soundscapes. We heard voices from the audience saying “I want to come and watch this again,” “The performance was exceptionally beautiful,” “I was moved by their sinuous movement,” and so on.

The Australia now team at the Australian Embassy leading this eight-month program are very proud to introduce you to multicultural Australia, and the country’s unique and diverse culture and experiences through this visit by Bangarra Dance Theatre.

Don’t forget to read the latest newsletter that wraps up the eight-month Australia now campaign here!