On 8 September, musicians from Australia and Japan came together for a special celebration of Aboriginal and Yidaki (didgeridoo) traditions for Australia now. Accompanied by members of the Yolngu community, Yidaki master Djalu Gurruwiwi visited Japan to meet and perform with his former student and Japanese Yidaki artist, GOMA, as part of celebrations for the Yidaki: Didjeridu and the Sound of Australia exhibition held at the Echigo-Tsumari Art Triennale. 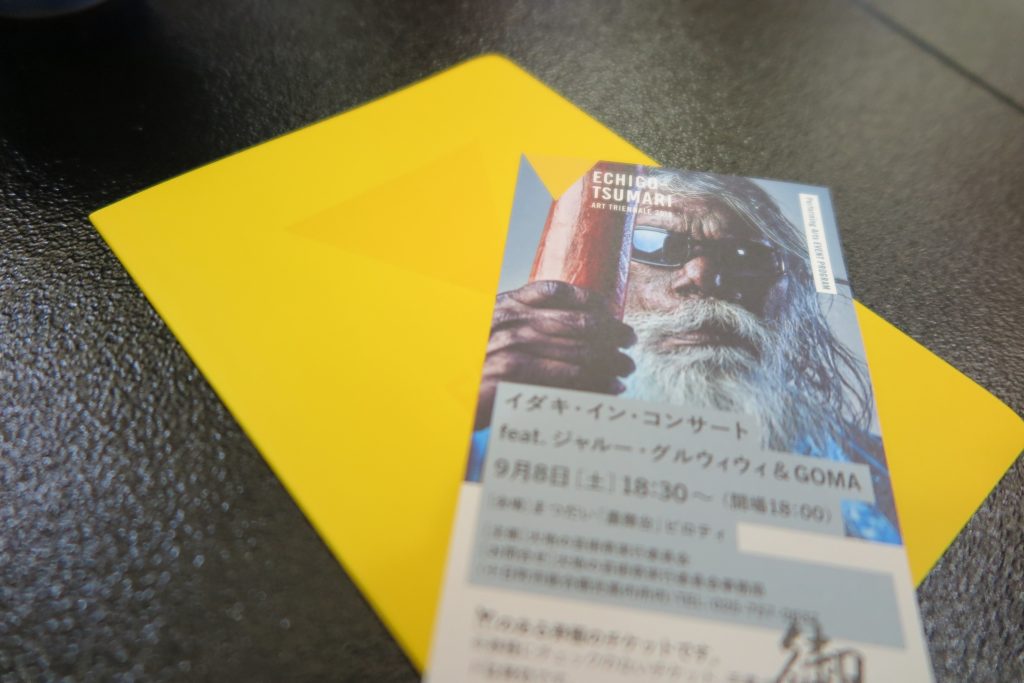 Also known as the didgeridoo, the Yidaki is the iconic sound of Australia, played by many Aboriginal people across Australia and around the world. The Yidaki has not only been shown to be one of the world’s oldest musical instruments, but is also a symbol of Aboriginal traditions, culture, and all humankind’s connection to the earth.

The Yidaki is deeply tied to the “songlines” or traditional Aboriginal story-telling practices. 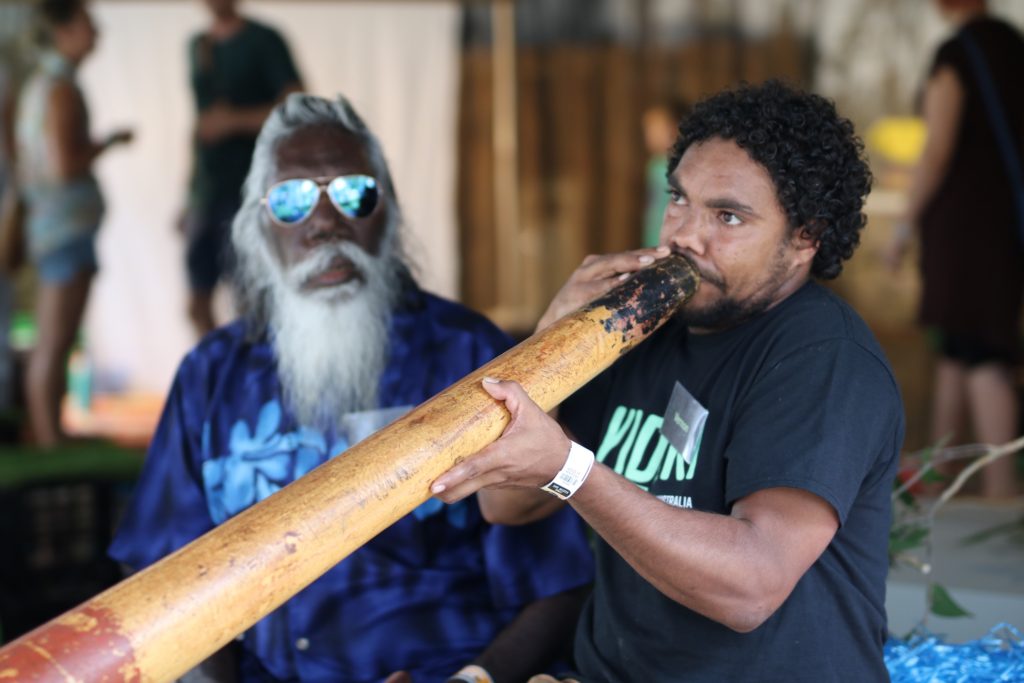 “Songlines are a kind of religion, which explains how lands are created in this universe,” Professor John Carty, Head of Humanities at the South Australian Museum, explained to the media at the exhibition ahead of the concert. 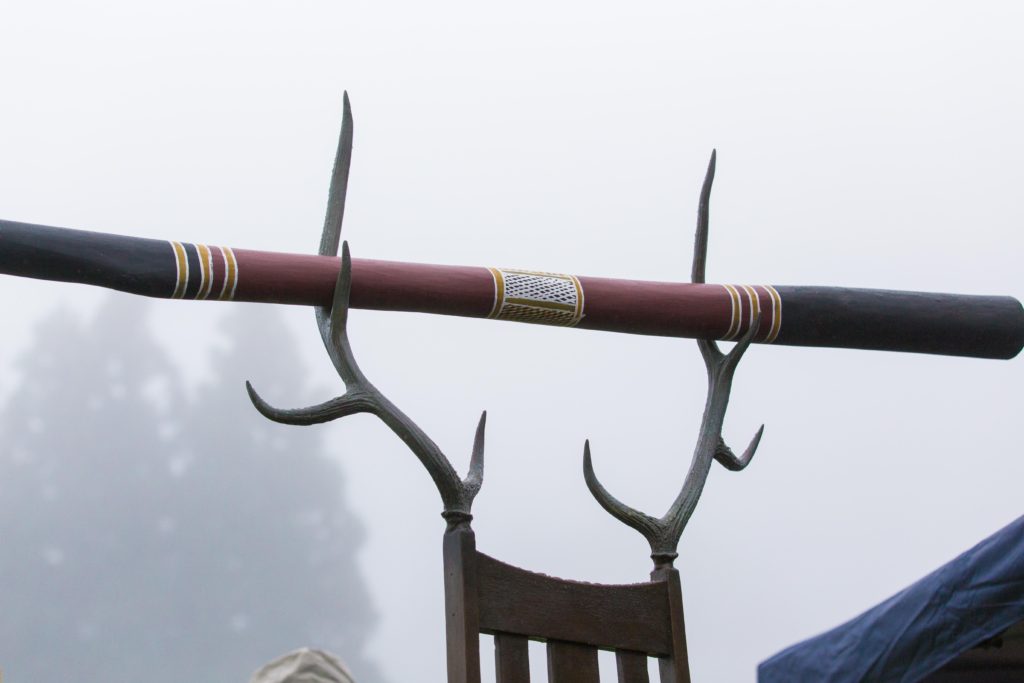 In addition to its long history as a musical instrument, the unique vibrations of the Yidaki are said to have healing effects. The exploration of this ancient, Australian musical emblem at the Echigo-Tsumari Art Triennale, itself an experiment in rural rejuvenation, was imbued with special meaning. 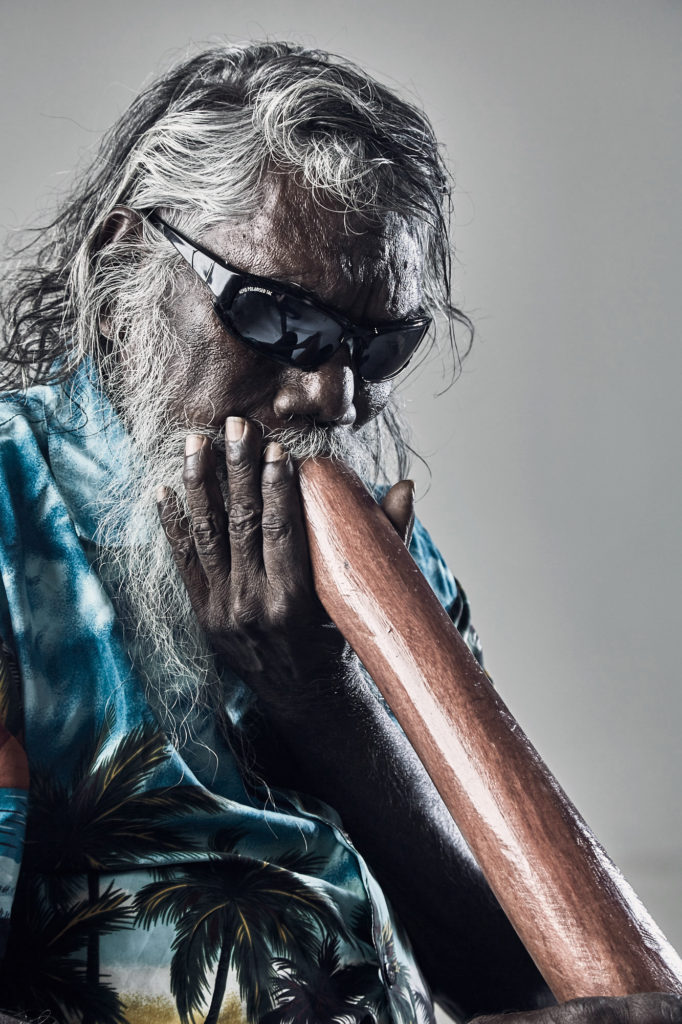 Prior to the joint concert, representatives from major Japanese media outlets conducted interviews with Djalu and GOMA, reflecting high-levels of local interest in the collaboration and Australia’s ancient Aboriginal cultures. South Australian Museum Chair The Hon Dr Jane Lomax-Smith AM and Director Mr Brian Oldman, as well as National Museum of Australia Assistant Director Ms Ruth Wilson, were in attendance for this special celebration. 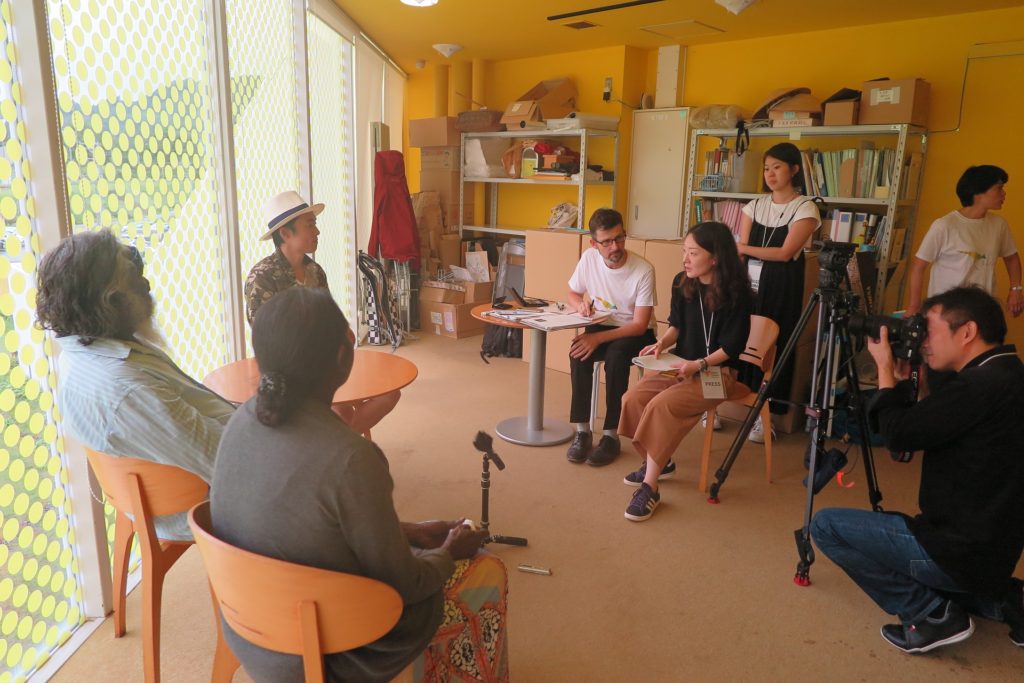 Japanese Yidaki performer and artist GOMA travelled to Australia some 20 years ago and learned how to play the instrument from Djalu. After returning to Japan, GOMA continued to explore his own techniques of using the instrument to express himself, but an unfortunate car accident which caused a serious higher brain-function disorder set him back on his journey. 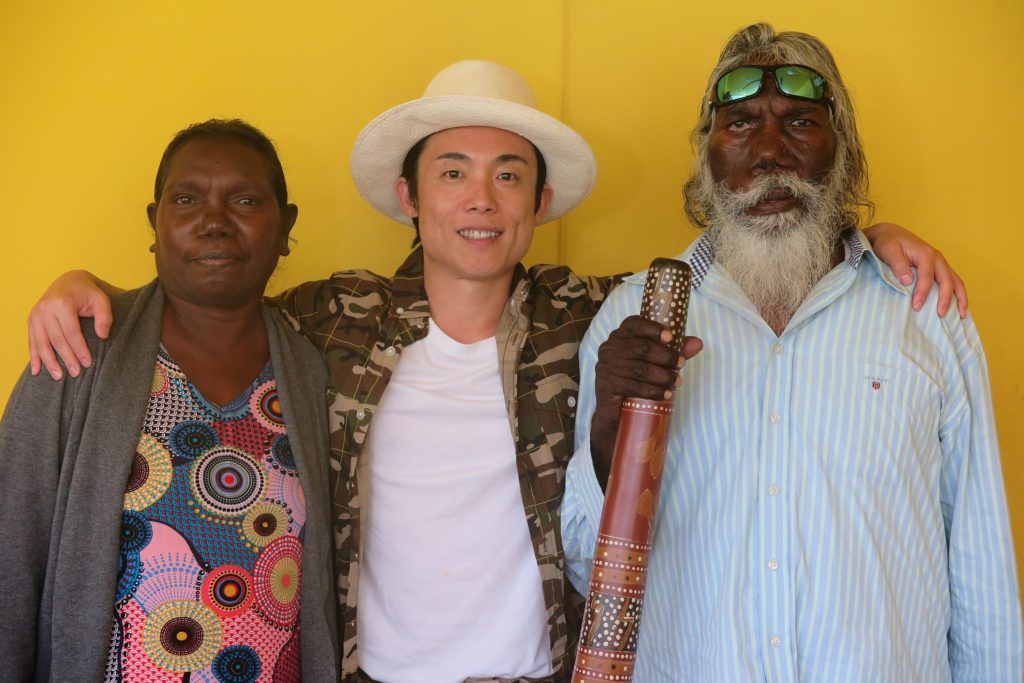 His condition meant he could not even recognise what a Yidaki was. But with the support of his family and friends he slowly recovered enough to play the instrument once again and visited Australia to reunite with Djalu and his family. 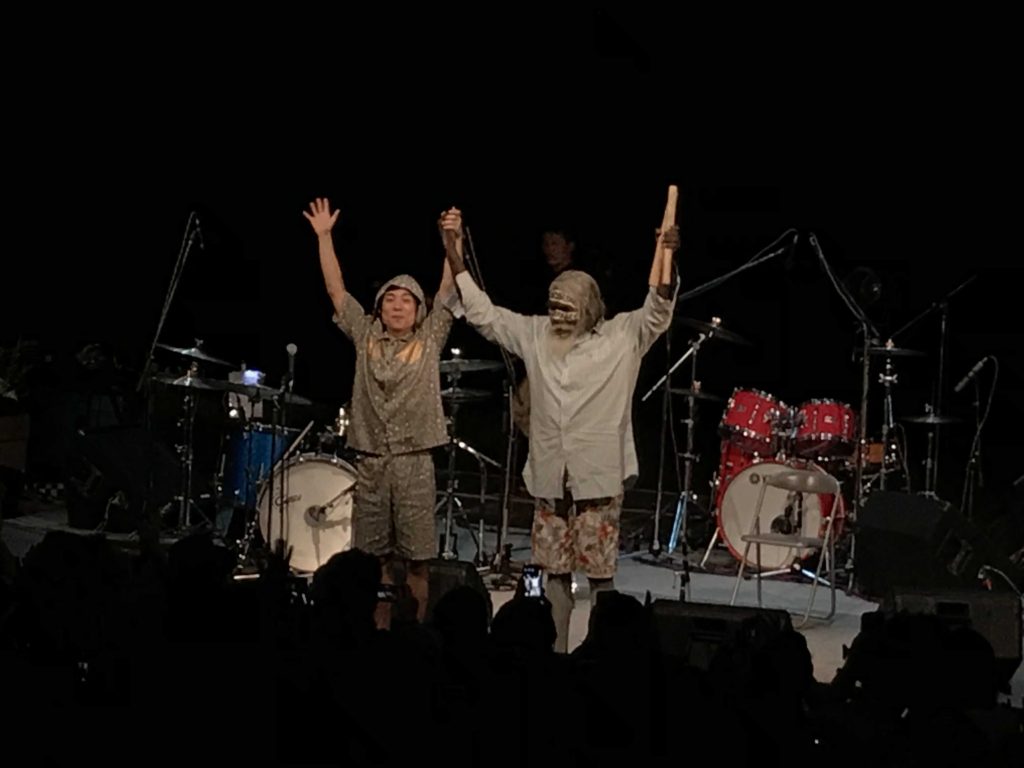 GOMA and Djalu met again at Echigo-Tsumari for the performance after some six years. “Staying with Djalu and his family, and playing the instrument with them somehow healed me from within,” he told the media in the interview. 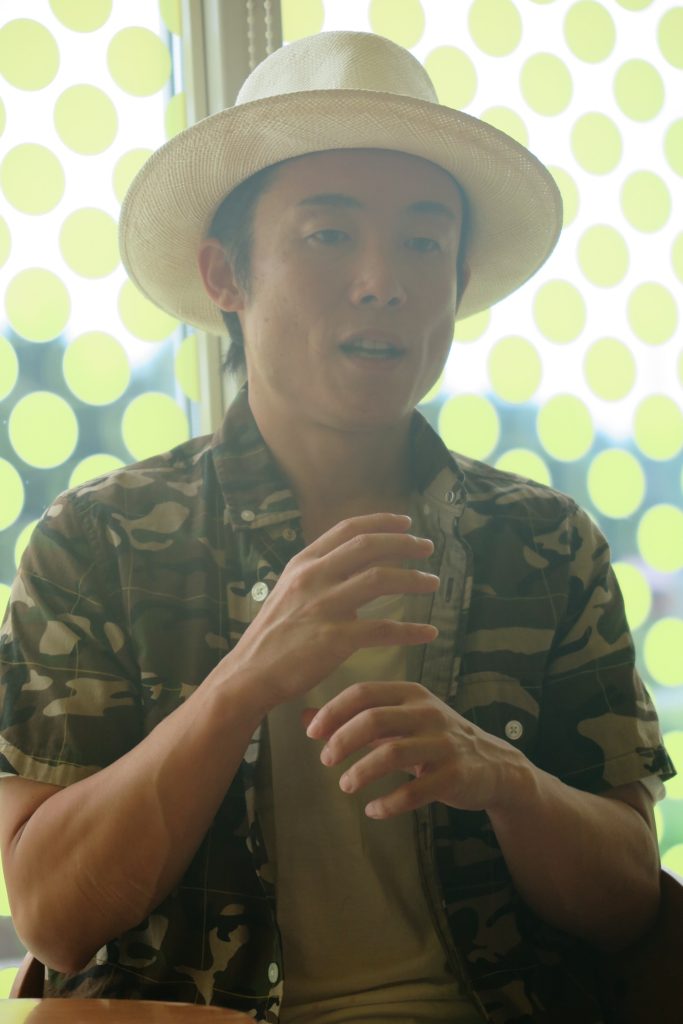 At a venue packed with around 600 people, Djalu opened with a traditional performance based on a ongline handed-down by generations of Yolngu people, with its sacred sound moving all in attendance. Following the opening, members of Djalu’s family played contemporary songs with traditional dances performed by Yolngu women. The breathtaking show concluded with a duet between GOMA and Djalu, who were called back for an encore. 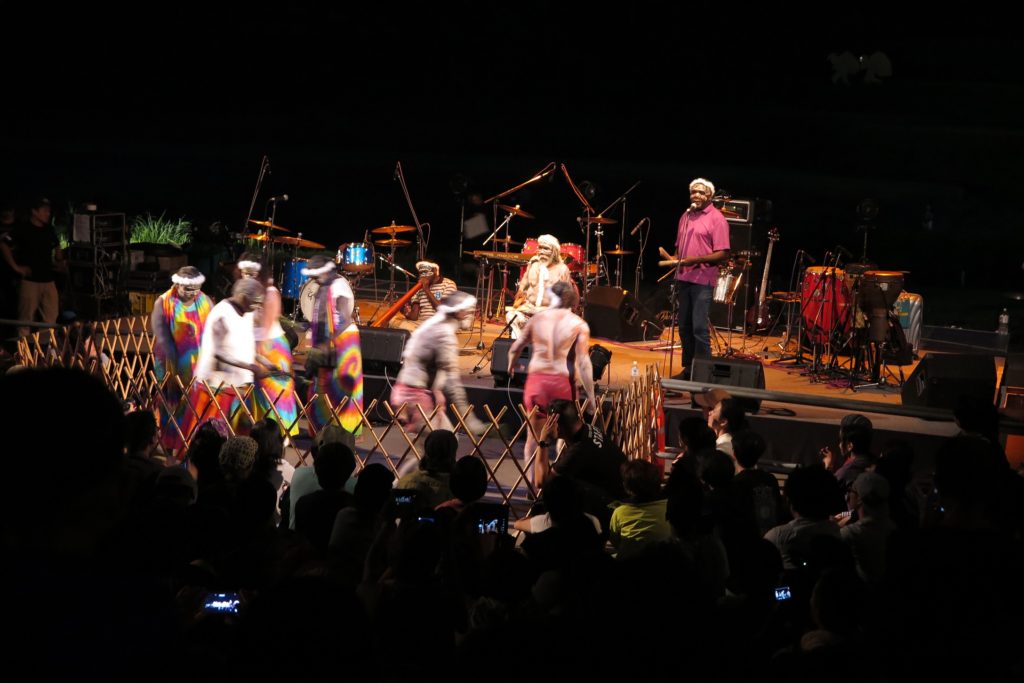 Basking in a wave of excitement, GOMA thanked the audience and Djalu’s family for their strong and warm support. “When I started playing Yidaki, I could not even imagine that a performance featuring this instrument would be held in Japan,” he said to the audience while on stage. GOMA also announced that his latest Yidaki song release was the first in the last nine years since the accident, defying his doctor’s advice that it would be difficult for him to remember new songs, considering his brain damage. 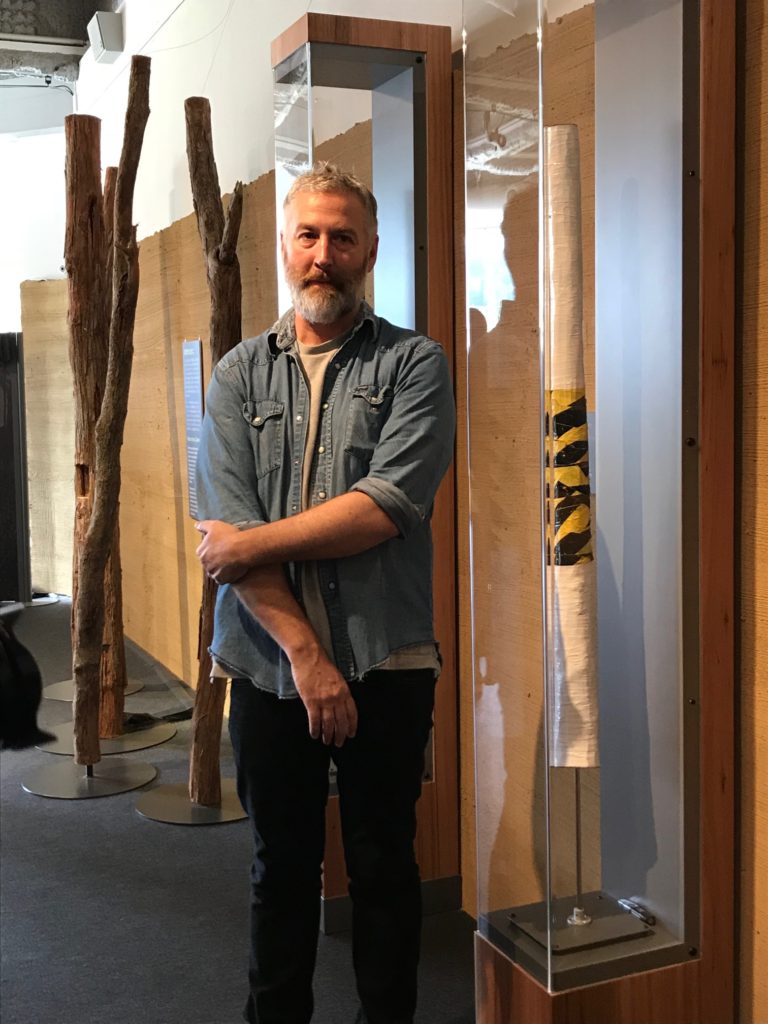 On the day following the special joint performance by Djalu and GOMA, an Australia-Japan exchange event was held at Tokamachi town, home to Australia House. The event was held with the generous cooperation of the Urada community. 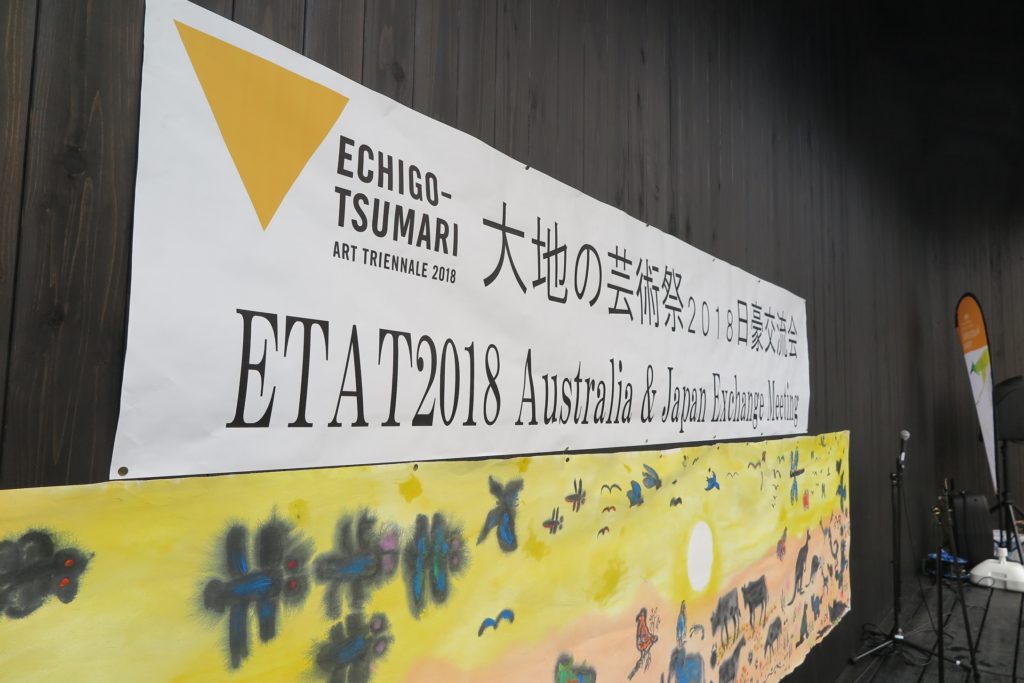 Echigo-Tsumari Art Triennale General Director, Mr Fram Kitagawa, greeted participants at the ceremony, congratulating Australia’s continued cooperation and dedication to the Triennale. “When we first started the art festival in 2000, Australia was the first country to extend support to our initiative,” Mr Kitagawa said. 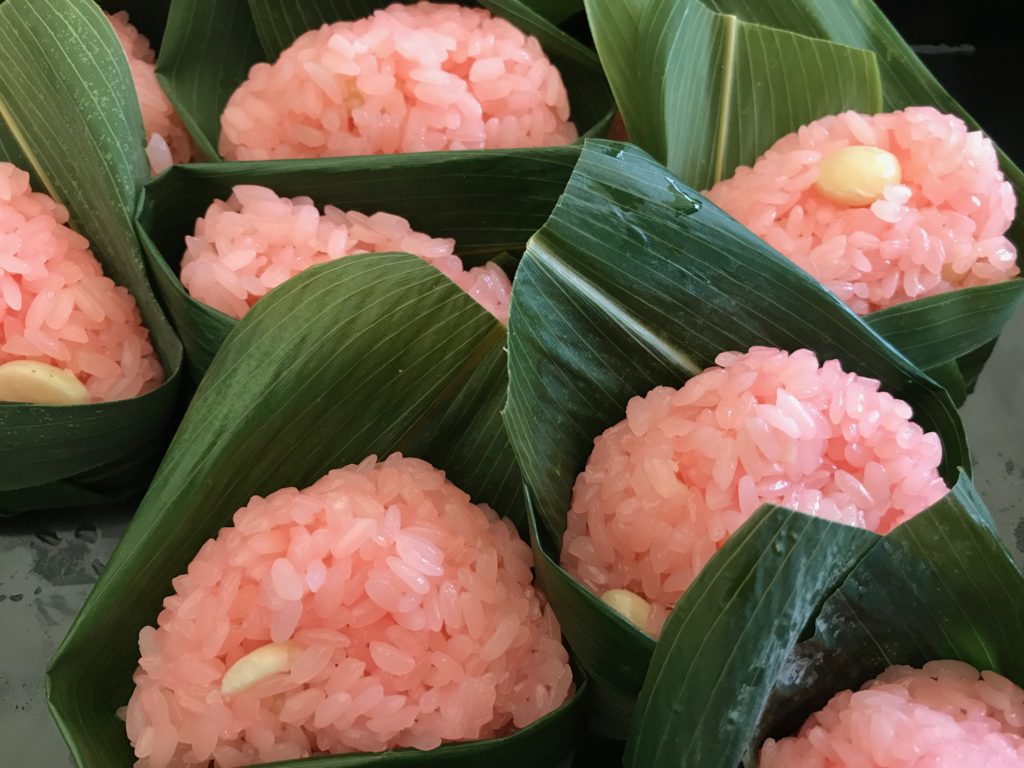 Following the ceremony, Djalu, GOMA, a large delegation from Australia and other attendees enjoyed local delicacies made from fresh local vegetables, complimented by traditional Australian sweets, including ANZAC biscuits. 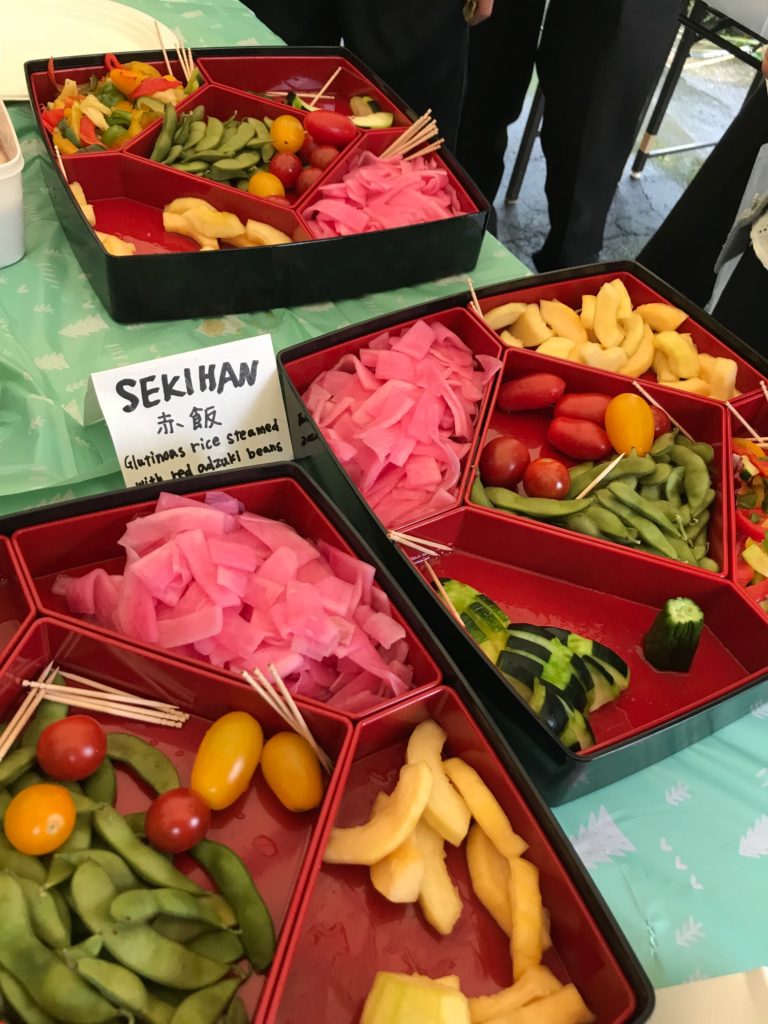 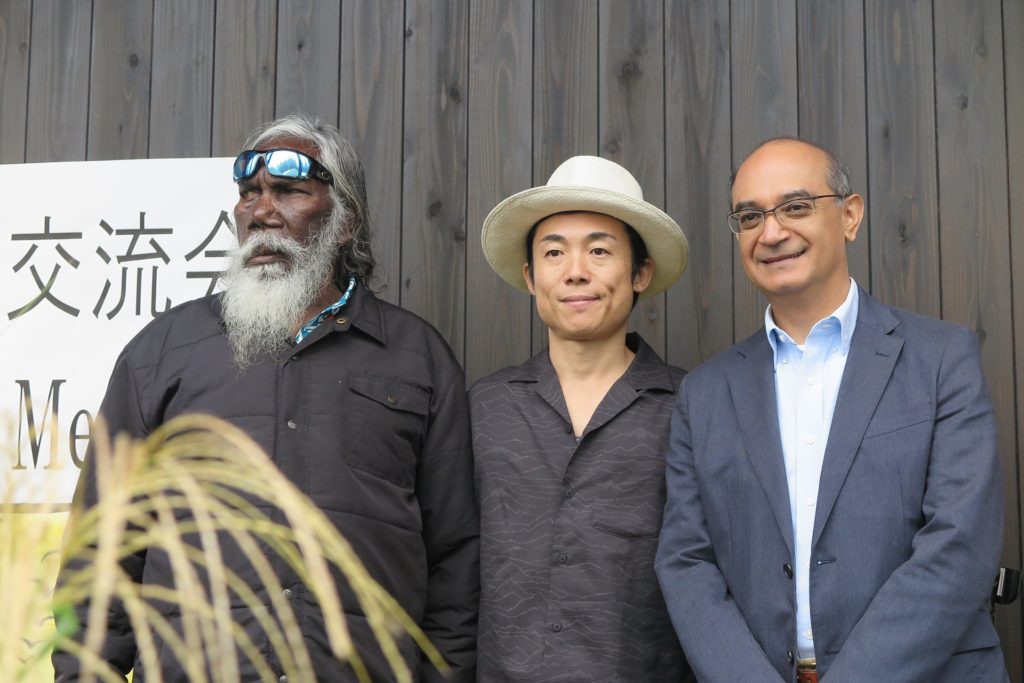 The exchange event was enhanced by the performances of Urada Daiko, a traditional drum troupe led by Urada youngsters, and a special Yidaki performance by Djalu and Yolngu performers. 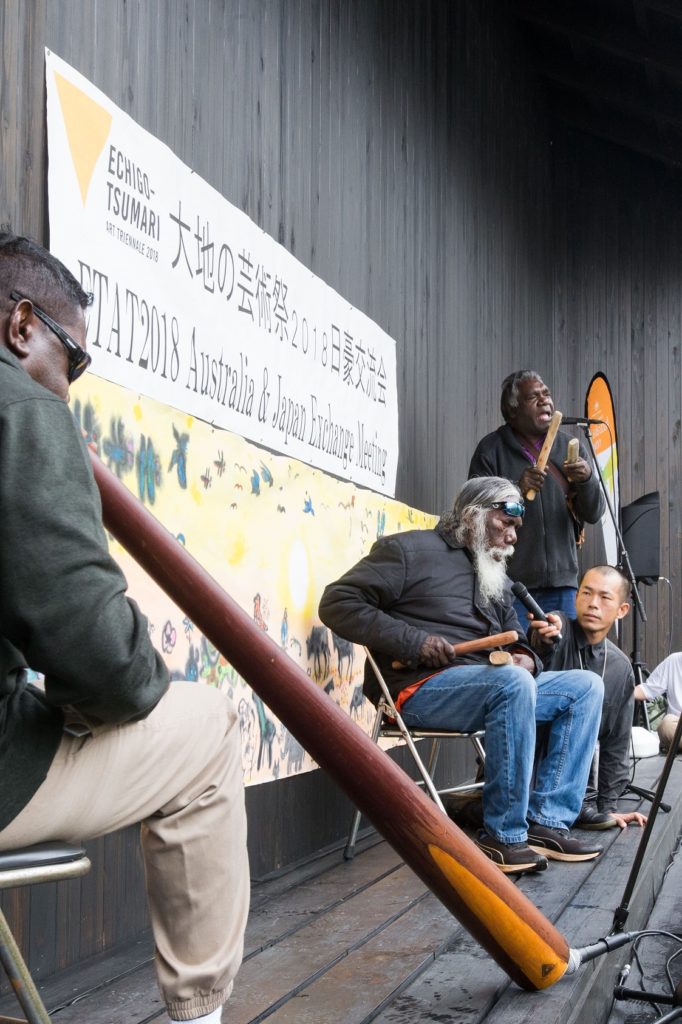 The exhibition, an Australia now highlight, was made possible thanks to the support Australia now sponsors together with the South Australian Museum, the National Museum of Australia, the Australia Japan Foundation and others, as well as continued support by local volunteers from the Echigo-Tsumari region. 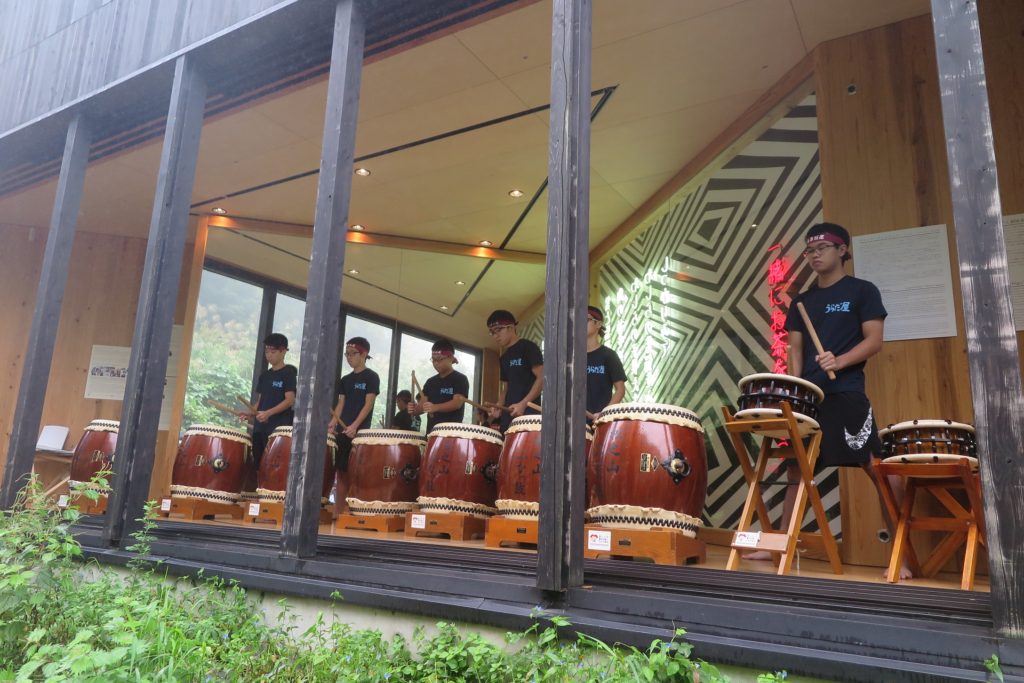 This special exhibition and performance brought to Japanese audiences a sense of the profundity of Aboriginal cultures exemplified by the Yidaki, the living embodiment of an ancient yet vital tradition.

There are only two months to go until this special Australia now promotional year wraps up in November. Keep yourself up to date through this website or via Facebook or Twitter.